Up until recently, and even currently, most of my interaction with the culinary arts has been through TV. It’s not just a ‘me’ thing, it’s a family thing. We love cooking shows, even more than we love cooking probably. I get so engrossed and emotionally invested in them. Watching cooking shows while I was away from home made me feel nostalgic. I  would cry when anyone got eliminated and cry when they won the shows – its quite bitter sweet.  I think the most tears I cried was when Nadia won the Great British Bake off and she said : I’m never gonna put boundaries on myself ever again. I’m never gonna say I can’t do it. I’m never gonna say ‘maybe’. I’m never gonna say, I don’t think i can. I can and i will. You can watch it here :

One thing I never dared to imagine or dream about was standing in a Professional Kitchen but last year in October, there I was at the Callebaut Chocolate Academy in Dubai with my work bench right next to Martin Chiffers’, an ARTIST. He is also an International Pastry Consultant. He has  worked at some of the World’s most prestigious locations including London, Dubai, Singapore and Korea .

Chef Chiffers is also a consultant for Bake Off : Crème de le Crème. He wrote a book with Emma Marseden, Bake Off Creme de la Crème. It is the perfect patisserie guide for the home cook. He is the only Pastry Chef in the World to win the European Pastry Cup twice in 2012 & 2014, amongst other things. Chef trains people for competitions, like the World Chocolate Masters Competition. World Chocolate Masters is the only competition in the world that is dedicated to pushing the boundaries of chocolate creativity. It is a platform for upcoming chefs to showcase their skills. I had no idea anything like this ever existed before this class.

My friend, Ma’u was travelling for a work-related trip and I decided to tag along.

Since she’d be busy most of the time, I decided to find something to do that would help improve my skills in baking or anything confectionary related. I started searching for short courses, something that would work with my travel dates until I came across Chef Chiffers’ Concept Showpiece Class at the Chocolate Academy.

The course looked bizzare at first glance – making sculptures with chocolate, I could not even comprehend it.
How can chocolate do all that? What did i even know about chocolate? All I knew about chocolate at the time was limited to my brownies. I just started learning how to “temper” chocolate! (Oh this was another term i learned from all these years of watching tv ). I discussed with my family and friends- like ‘hey, i saw this course and i think it would be super cool, what do you think?‘  While they all agreed it was cool, a few people thought it was not very practical for me at the time.

After a few days, i got the clarity i needed. I decided that if there was anything I was going to spend my time and money on, it would be something that I would be able to talk about for the rest of my life, something I couldn’t learn on my own. I love doing things that would push me out of my comfort zone (Maybe that’s why we went zip-lining on our first day in Dubai, jet-lagged and running on zero hours of sleep).

Day 1
On the first day I walked in, I remember feeling extremely intimidated especially when I realised the other  people in my class were experienced chefs / bakers. Some of them had their chefs jacket on (adds to wish list) . I was given an apron so I wouldn’t ruin my ‘not-so-fancy’ clothes. I think i wore an Abaya the first day with my neon pink Nike trainers. Oh I wore these trainers for all three days! 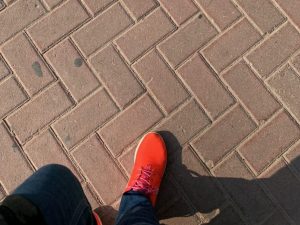 The Academy was always cool – probably because creating chocolate desserts in a warm kitchen might be a disaster. There’s this automated sliding door that opened into the kitchen. I just enjoyed walking through those doors for some weird reason. Maybe it was the feeling of walking into the kitchen. Maybe it made me feel like i was a part of something important. Maybe it made me feel as if i was right where i needed to be. Whatever it was, it made my heart beat a little faster.

The kitchen was super clean and it just had everything. Chocolate tempering machines, massive refrigerators and freezers, marble table tops, professional mixers and a million utensils. It’s an absolute dream. The one thing i couldn’t get over was all the chocolate – i mean i knew it was the Chocolate Academy but i did not expect that the Calleabaut Chocolate i was buying in small quantities, often times from The Pantry NG was what was just sitting all over the room. Helloo  – it’s premium chocolate! I thought it was bonkers probably because i was a small home baker but either way I was stoked! I had to try so hard to contain my surprise and excitement. Everyone else seemed oblivious to it.

I came across Calleabaut Chocolate, pronounced ‘Call-e-beau’  when i started working on my Brownie Recipe and learned that the two most important things in baking a great brownie are good chocolate and good butter. I called it call-e-but until i went to the Academy (LOL).

The class started and Chef told us we were going to make a Pavone (Peacock). He had sketched it -I told you he was an artist.

We started out by making sketches on  paper – I am somewhat artistically challenged. Fine art was definitely NOT my favourite subject in school.  After our sketches were done,  we started creating the individual components. We did not have to temper the chocolate because there was a machine running constantly with all the tempered chocolate we would need – kind of like a chocolate fountain. Then we proceeded to make all the individual components that would make up this magnificent showpiece.

Somewhere in between, we took a break and had lunch. Chef Panos (Panagiotis Samaras) knows where to get all the good food in Dubai. He also made us Fudge and Ice Cream the other days. He is a teacher at the Academy and he helped the course run smoothly. You can tell he is really passionate about what he does – it would be nice to attend his class some day.

We created the base that the whole structure (peacock) was going to stand on. I realised that there’s probably some math and physics that goes into this because you have to understand all your components and their weights, understand how the structure would balance, else, well, it would probably fall and break quite easily. (In summary, it will end in tears). We also made the bark, moulded the leaves, the egg and the peacock.

Day 1 was an eye opener. I found it challenging (i heard it’s better than saying difficult).  I felt like I was back in Further Math class in secondary school. My structures didn’t look half as clean as chef’s (well duh Aiko! What were you expecting?) Everything was new and it required a lot of brain power for me to follow what was going on, understand what we were doing and why. Chef was really patient and helpful especially since he knew i did not have any experience whatsoever.

I could not write a script for the rest of the day. Everything went downhill from the moment i stepped out of the Academy. I was supposed to meet up with my friend after my class but i could not reach her. I had mysteriously lost all connection on my phone that morning and could not contact anyone.

I borrowed a phone from Chef Philippe at the Academy, a stranger at the metro station and  even a taxi driver so i would find her but we kept missing each other. I gave up after a while and decided to head back to the hotel – but  i got lost. None of taxis would stop and I questioned my cab hailing skills. So I decided to get food (yes i was still lost but i was hungry). I grabbed a meal at KFC (which i ended up not eating – but that’s another story entirely).

I was feeling pretty hopeless until i met someone who showed me my way back, walked me halfway – it was such a kind gesture, probably the first positive thing that happened that evening. Everything just felt like a disaster before that point. I was exhausted – between standing in class all day and walking around for 2 hours trying to find Ma’u, i was just done.

When i finally got back to the hotel, I sent my mum voice notes on WhatsApp (since you can’t really Facetime in Dubai) saying i would not go back. Mama wasn’t having it. I told her my legs hurt from standing all day. blah blah blah.

‘Don’t say you can’t continue’ she said. ‘Get some paracetamol and go back there tomorrow. You can’t spend all that money for nothing, you MUST- i know you can.’  She convinced me that I was a Chef (LOL ).  Mama sold the story and I bought it. She said “You’ll be fine. It won’t be hard tomorrow because you know what to expect’.

After i unpacked my emotions, I realised that the day was actually not that bad, I had learned so much. I only had a rough evening. I met a fantastic Chef, I Was in a Professional Kitchen and I was taking a course at the Chocolate Academy. I told myself that it was okay not to know everything. Everyone has to start somewhere.

So after all that, i went back. With no expectations and an open mind.

DAY 2
I went to the Academy again, only this time i walked because i knew where it was. Greeted by the quote on the wall,Chocolate doesn’t ask silly questions chocolate understands. I started feeling a bit more positive. I was ready to go again. 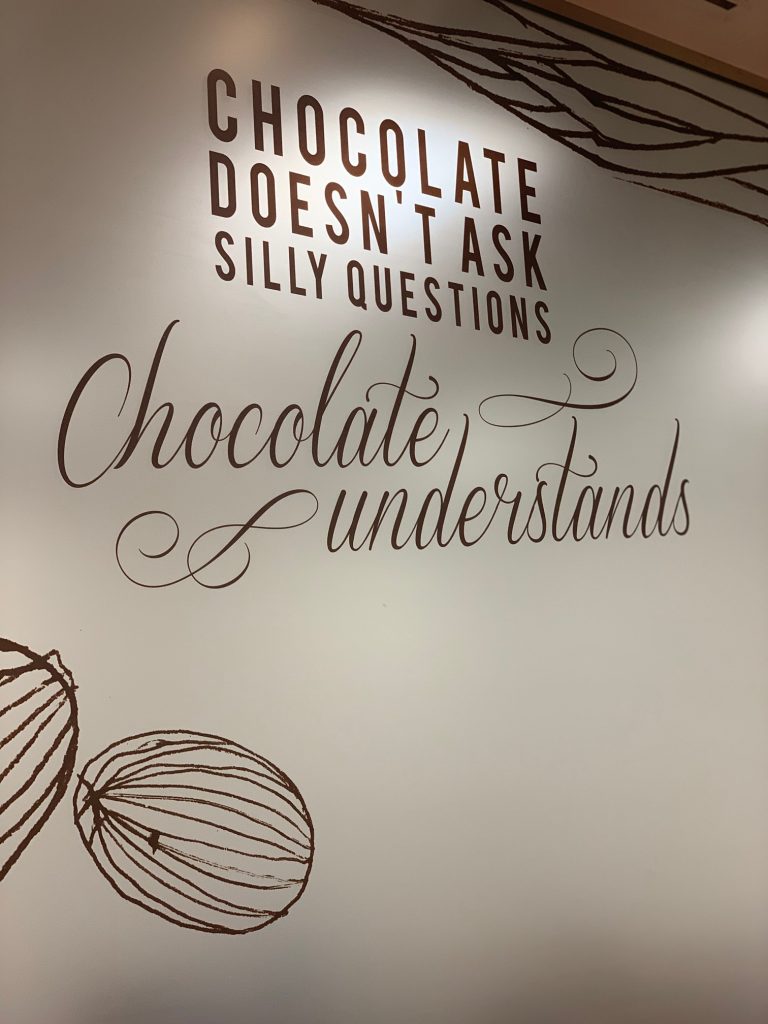 Looking forward to the rest of the story next week? Leave a comment below!
Thanks for reading.